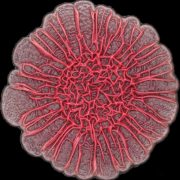 In a study published today in Nature Communications, a research team led by Ken Shepard, professor of electrical engineering and biomedical engineering at Columbia Engineering, and Lars Dietrich, assistant professor of biological sciences at Columbia University, has demonstrated that integrated circuit technology, the basis of modern computers and communications devices, can be used for a most unusual application—the study of signaling in bacterial colonies. They have developed a chip based on complementary metal-oxide-semiconductor (CMOS) technology that enables them to electrochemically image the signaling molecules from these colonies spatially and temporally. In effect, they have developed chips that “listen” to bacteria.